05/01/10 Tonight’s the night for the annual White House Correspondent’s Dinner. If the past is prologue, it will surely be a bizarre scene – a weird mash up of Oscar Night and DC Rubber Chicken Ballroom. I’ve gone to a bunch of these and it never fails to entertain. The Hollywood types get to pretend people in Washington care about what they have to say on policy issues and the DC types get to squeal like schoolgirls over the Jonas Brothers. I remember a couple years ago everyone desperately wanted to get their photo taken with Sanjaya from American Idol. Is he still around?

This used to be your usual boring dinner until the famed (and sadly departed) Michael Kelly of The Atlantic Monthly (then a booker for one of the morning TV shows) added an element of celebrity and scandal to the staid affair by inviting Iran Contra figure Fawn Hall to the dinner in 1987 and Donna Rice (Gary Hart’s ‘Monkey Business’ shipmate) the following year. It hasn’t been the same since. News organizations compete to get the most popular or oddest celebs they can. 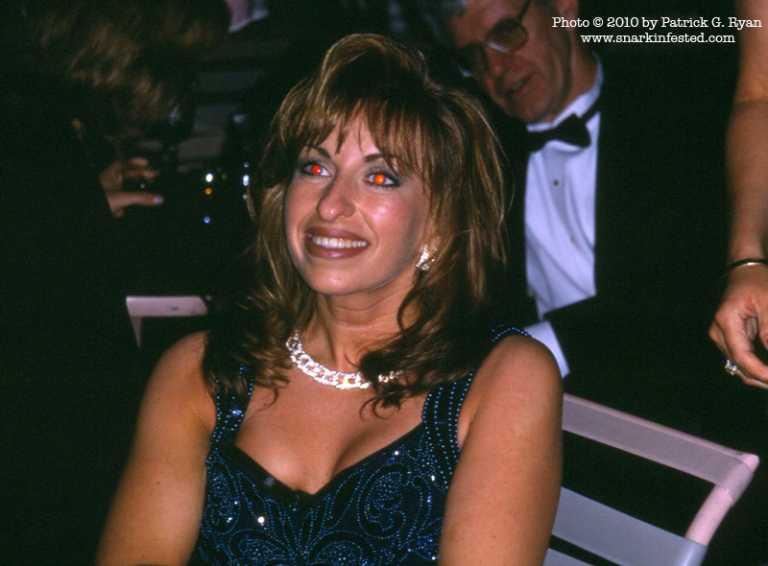 [Paula Jones attends the 1998 White House Correspondent’s Dinner as a guest of Insight Magazine. The occasion marked the first time she and President Clinton were in the same room since the hotel room in Arkansas where she said he sexually harassed her.

A  cibachrome print of this image shown under the title, “The Devil In Ms. Jones” was a prize winner in the group show “Marches, Marble & Events”  held by The Washington Center for Photography in March of 1999.]