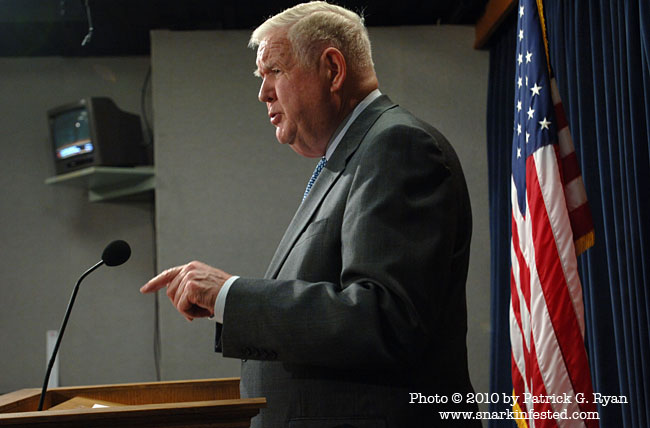 [Rep. Murtha press conference in the House Press Gallery in 2006.]

The first Vietnam combat veteran to become a Member of Congress, a king of pork-barrel politics, a survivor of the ABSCAM scandal and a vocal critic of the war in Iraq, Murtha was a close ally of  Rep. Nancy Pelosi (D-CA) and was her pick to fill the position of House Majority Leader she vacated after her elevation to Speaker of the House.  Murtha wound up losing that race to Rep. Steney Hoyer (D-MD).

UPDATE:  02/09/10 According to the Pittsburgh Post-Gazette, Rep. John P. Murtha’s (D-PA) death has been attributed to mistakes made by the surgeon during Murtha’s gallbladder surgery. According to a source close to the Murtha family, doctors inadvertently cut Mr. Murtha’s intestine during the laparoscopic surgery which caused an infection.